Climate war and the billionaire class: Capitalism versus humanity in the fight to save the planet

This forum will address the "climate war" that has begun and the ecosocialist solutions needed to address it. More than ever, the line between rich and poor is a line between survival and death, as inequality and climate change combine to create new extremes of oppression. A handful of people live in obscene luxury, while billions are condemned to permanent poverty and hunger – and rich governments build fences, walls and concentration camps to keep the poor away.
Speaker Ian Angus is a long-time activist in socialist and environmental movements in Canada and internationally.

Author
Facing the Anthropocene: Fossil Capitalism and the Crisis of the Earth System (Monthly Review Press, 2016)

Ian Angus is also a featured speaker at the Socialism for the 21st Century Conference:http://www.socialismforthe21stcentury.org/ 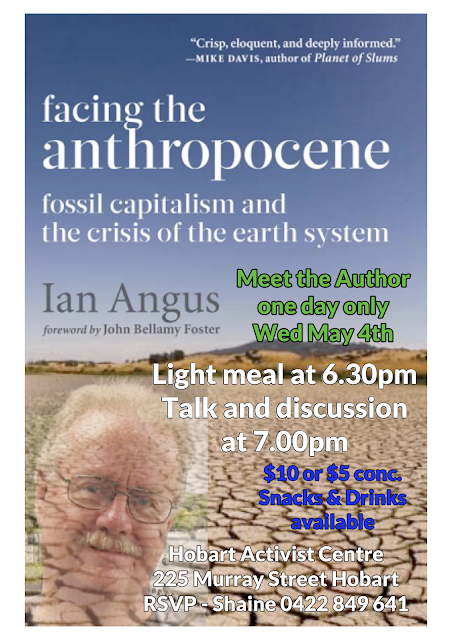 Come along to show your support to stop the forced closure of Aboriginal communities.  As John Pilger has stated "Australia has again declared war on its Indigenous people..." 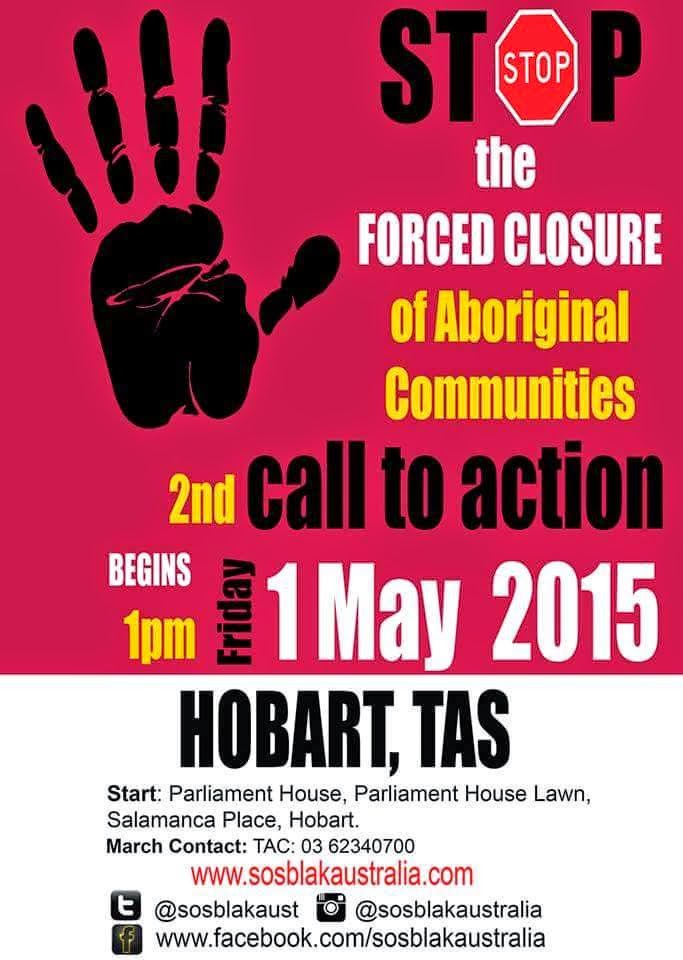 Read the latest Green Left Weekly article about this by John Pilger: "The secret country again wages war on its own people" https://www.greenleft.org.au/node/58835

Green Left Weekly's European correspondent and Socialist Alliance member Dick Nichols, usually based in Barcelona, was in Athens for the historic win. He is speaking across the country about SYRIZA's challenge to austerity and elite rule. Radical leftist party SYRIZA has swept to power in Greece promising to end austerity and threatening to spark an anti-austerity fight-back across Europe. Dick will be speaking this Sunday in Hobart - so don't miss out on this opportunity to learn about this historic victory. 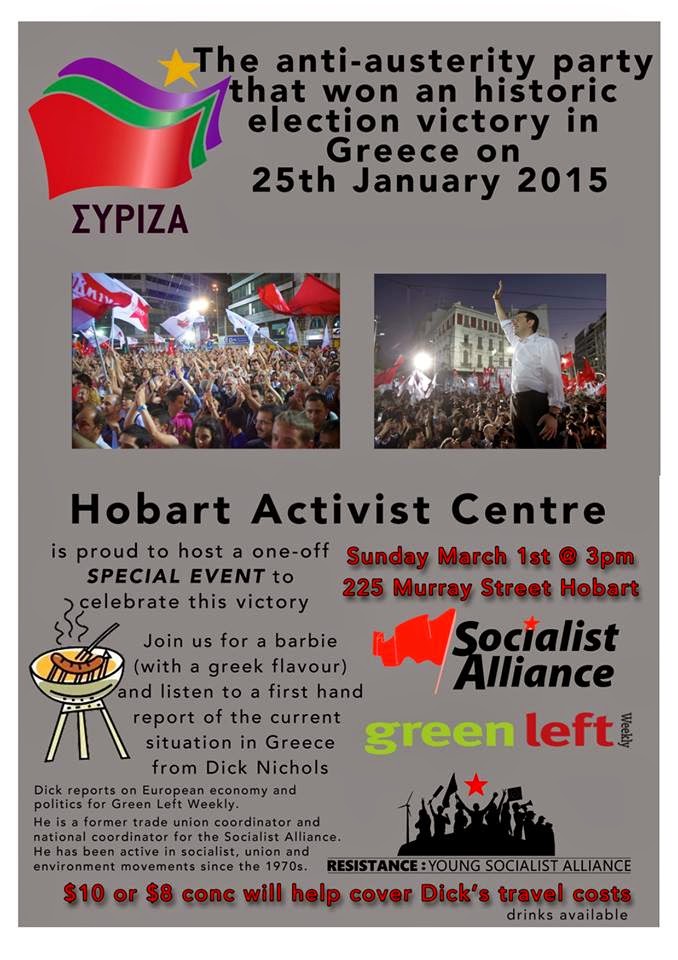 The Hobart Branch of Socialist Alliance invites you to their End of Year BBQ, which will be also be a farewell for Linda and to their last Salamanca stall for the year so please come along and join us.
Our special guest will be Shamikh Badra who is currently touring Australia as he's the youth and students coordinator for the Palestinian People Party in the Palestinian Gaza Strip - so definitely an event not to be missed! 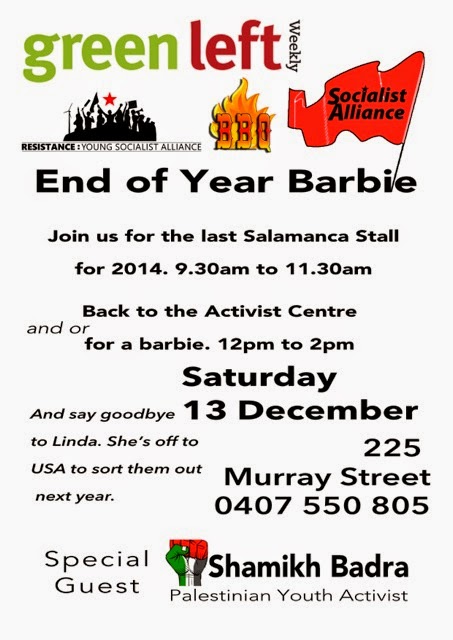 "On September 21, over 2,500 events were held around the world to call for climate action ahead of the UN Summit in New York. Hobart’s part in this global picture was a gathering of about 500 people at MONA (Museum of Old and New Art). Many arrived with a big bike convoy from the city. The crowd gathered near the museum’s entrance for a big group photo, with placards demanding urgent action on climate change. This was followed by two sides volleying the earth over MONA’s tennis court net – a battle between fossil fuel and renewable energy – and speakers including Susan Austin from Climate Action Hobart."

Come along to the Hobart Premiere of Disruption

"Not quite sure you feel like taking to the streets to spur action on climate change? This new movie aims to change your mind.In the lead-up to the People's Climate March later this month, filmmakers are releasing a new documentary called "Disruption," which highlights the consequences of ignoring climate change. The film features well-known environmental leaders such as Bill McKibben and Dr. James Hansen, and documents activists' efforts to mobilize people for what may be the largest climate change march in history.

"We’re the first generation to feel the impacts of climate disruption, and the last generation that can do something about it," the film's synopsis reads." Huffington Post. 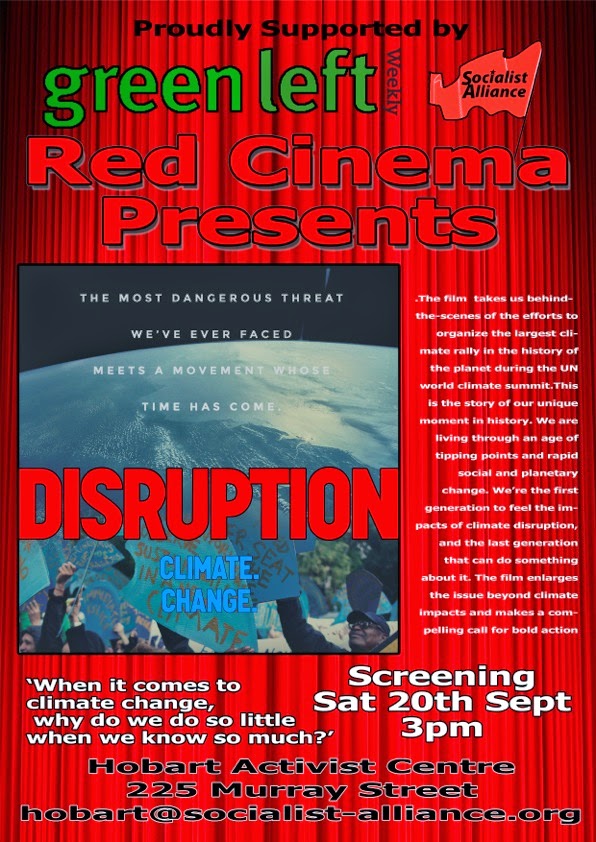 Vigil for Gaza, Friday 15th August, 5pm at the corner of Murray and Macquarie Streets, Hobart

This Friday we will hold a vigil to stand with the people of Gaza!  We call on the Australian government to: condemn Israel's attack on Gaza and impose diplomatic and trade sanctions on Israel. We call for support for the international Boycott, Divestment and Sanctions (BDS) campaign.   Please wear red, green or black (Palestinian colours) to the vigil and bring your voices, Palestinian flags, banners, placards, friends and family.

According to the Palestinian Centre for Human Rights in Gaza (PCHR), 9086 people have been injured, Israel has now killed 1922 people during its 33 day assault on Gaza the vast majority of them civilians. More than 300 of those killed have been children.   Israeli targets have included homes, mosques, schools, hospitals, medical centres, ambulances and power and water treatment plants. Even a UN-run school was targeted, killing 15 people and injuring hundreds of women and children who had sought refuge. 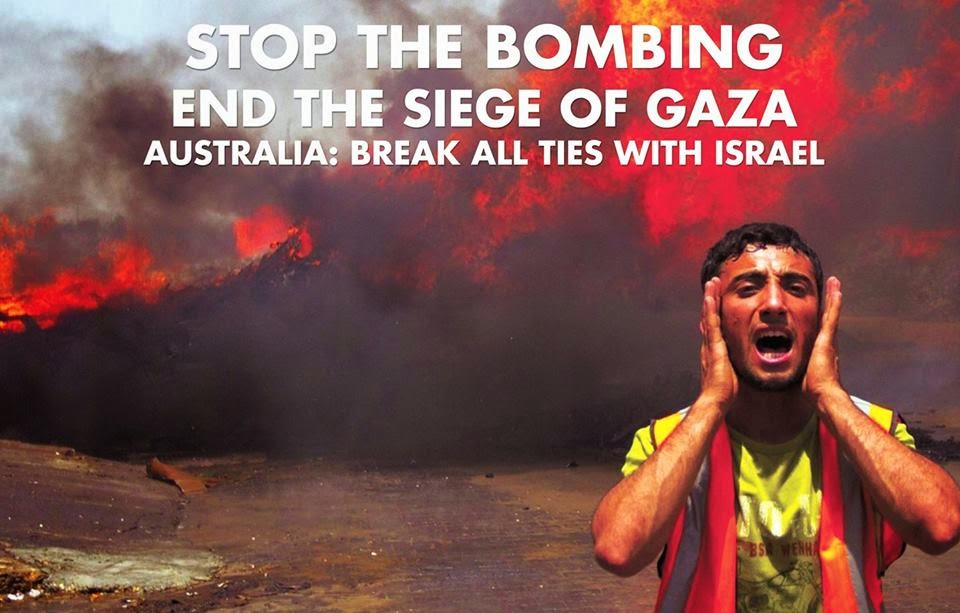 How to run SA locality blogs